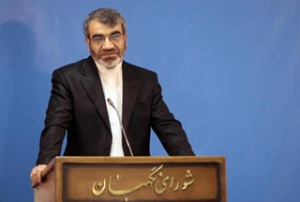 (PRESSTV.IR) Iran’s Guardian Council has suggested that the number of votes collected in 50 cities surpass the number of people eligible to cast ballot in those areas.

The council’s Spokesman Abbas-Ali Kadkhodaei, who was speaking on the Islamic Republic of Iran Broadcasting (IRIB) Channel 2 on Sunday, made the remarks in response to complaints filed by Mohsen Rezaei — a defeated candidate in the June 12 Presidential election.

“Statistics provided by the candidates, who claim more than 100% of those eligible have cast their ballot in 80-170 cities are not accurate — the incident has happened in only 50 cities,” Kadkhodaei said.

The spokesman, however, said that although the vote tally affected by such an irregularity could be over 3 million and the council could, at the request of the candidates, re-count the affected ballot boxes, “it has yet to be determined whether the possible change in the tally is decisive in the election results,” reported Khabaronline.

Three of the four candidates contesting in last Friday’s presidential election cried foul, once the Interior Ministry announced the results – according to which incumbent President Mahmoud Ahmadinejad was declared the winner with almost two-thirds of the vote.

Rezaei, along with Mir-Hossein Mousavi and Mehdi Karroubi, reported more than 646 ‘irregularities’ in the electoral process and submitted their complaints to the body responsible for overseeing the election — the Guardian Council.

Mousavi and Karroubi have called on the council to nullify Friday’s vote and hold the election anew. This is while President Ahmadinejad and his Interior Minister Sadeq Mahsouli have rejected any possibility of fraud, saying that the election was free and fair.

The above statement is the Council of Guardians’ way of passing its own vote of non-confidence on the government’s handling of both the election procedure and the aftermath of the event. They do not wish to be tainted by the obvious corruption of the recent presidential poll as this would further blemish and endanger Iran’s “Islamic Revolution”. A number of key clerics on the Council also seem to feel threatened by the pressure applied to Ayatollah Rafsanjani, his family, and others (like candidate and former PM Mir-Hossein Mousavi) who have voiced disbelief at the result of last week’s presidential vote. If president-“elect” Ahmadinejad and Ayatollah Jannati are going to attempt a power play against Rafsanjani and Mousavi, then they will have to muscle past the Guardian Council to get to them. — Ed.