Why Jews are Good at Math

Jewish children learn early on about numbers and their properties

It’s commonly accepted that Jews do well in math and science because there’s such a strong emphasis on learning within their tradition, as well as amongst Jewish families in general. But can good study habits and parental prompting account for the incredibly disproportionate share of awards (Nobel and others) that have been garnered by Jewish mathematicians and scientists?

Why would a people making up such a small percentage (~0.25%) of the global population earn 25% (or more) of the world’s top prizes in economics, physics, mathematics and medicine?

To delve a little deeper into why this might be, we will explore how the structure of the religion may play a crucial role in embedding complex social, mathematical and dimensional associations into the Jewish psyche in very subtle ways.

The Hebraic numeral system is one of the oldest decimal systems in existence. The letters of the aleph-bet (aleph through yod shown below) have number values according to their placement in the alphabet.

The number ten, yod, is the next logical step in the evolution of unity from the number one, aleph, just as in the modern decimal model. (In a way, yod is a more ‘concentrated’ form of ‘singularity’ than aleph, because aleph also reflects the fundamental duality present in the creation; the division of light from darkness; the division of ‘waters above’ from ‘waters below’. This is visually expressed in how an aleph is drawn. Below, right.)

Second Dimension (shapes)
Seven as One: A cyclical view of time and space

The most basic 2-dimensional shape is the circle; all points along its perimeter are equidistant from its centre. It takes seven circles (one in the centre and six around it) to achieve the next most efficient (and unified) use of 2D space using multiples of the same-sized circles. (This applies not only to flat [2D] shapes but also to extruded [3D] forms thereof.) 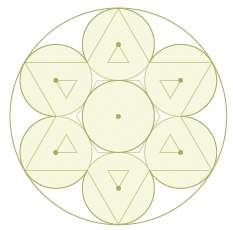 This lesson can be demonstrated at home with cookies of the same variety or equal-sized coins; echoes of it are to be found everywhere in nature, from honeycombs (extrusions) to snowflakes (polarised ions that attract and consolidate water vapours along flat, crystalline planes) to the most common carbon-ring molecules, like benzene or hexane.

The “seven as one” progression engenders the familiar six-pointed star (Star of David or Seal of Solomon) and represents the seven days of the week as individual cycles of equal length (circumference), six of which are equally anchored to the seventh day (Shabbat), the Holy Day.

Third Dimension (forms)
Thirteen as One – The unseen aspects of unity

Moving from circles to spheres (2D to 3D), we find that it takes twelve equal-size spheres to enclose (hide) a central sphere of the same size. Each sphere perfectly touches its five neighbours as well as the centre sphere.

Each sphere can symbolise a year in the life of a male child, culminating in the age of Bar Mitzvah (son of the commandments), at thirteen. The kind of man he will be, however, is still for him to determine through his own future decisions. Female children are honoured upon reaching the age of twelve (Bat Mitzvah), signifying their nature as vessels intended to bear the “hidden” unity of a nascent individual.

Thirteen are the tribes; Joseph was split into two tribes, Ephraim and Menashe, whereupon the Levites became the (esoteric) thirteenth tribe. Thirteen are the Articles of Faith as described by Maimonides. Thirteen are the merciful attributes of G-d set down in the Torah. Thirteen are the nodes of Metatron’s Cube in Kabbalah. Adar II is the 13th (semi-hidden, intercalary) month of the year.

Thirteen is at the crux of the Newton-Gregory Problem (year: 1694), defined during an argument between David Gregory and Isaac Newton. Linear calculations and harmonic analysis show that the number of equal-sized spheres touching a common sphere cannot exceed thirteen, but in using this calculation method, thirteen is likewise shown to be impossible — unless, of course, the centre sphere is recognised to be touching itself (i.e. being self-relative as well as relative to the greater whole).

This is not the same as aleph’s “#1”, but is The One that cannot and should not be named.

Each of the foregoing modes of unity were derived by projecting “multiples of one” into the most fitting analogs of “oneness” at each basic level of dimensional reality. G-d, meanwhile, is ever One. Ever was and ever will be. There are no multiples.

This primary tenet of monotheistic unity in Judaism is boldly embodied in one of the chief prayers of the religion; the Shèma (which means “to hear”).

Obviously, a person doesn’t have to be Jewish in order to be smart, but it apparently does help. How much of that effect is due to the influence of community and genetics; the way in which mathematics is woven into the religious culture and narrative; the acquisition of the ability to read and write in either lateral direction — is probably unknowable.

It should, of course, also be stated that none of the preceding is intended to strip credit from persistent and devoted Jewish mothers everywhere for the achievements of their sons and daughters. This has simply been an exercise in reminding us Where Else credit is always rightly due.

3 responses to “Why Jews are Good at Math”