Chávez to Seize All Seaport Warehouses 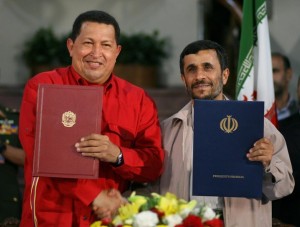 The Associated Press is reporting that Venezuelan President Hugo Chávez will seize all of his nation’s privately-owned seaport warehouses, citing “state security” as the reason. The message came from the country’s Public Works Minister Diosdado Cabello.

Chávez has already expropriated a significant portion of the gold and petroleum industries, a good deal of the food staple distribution system, as well as most steel and iron manufacturing, and has designs on doing the same with the gas industry. Chávez has also managed to suppress the bulk of Venezuela’s dissenting media over the past few years by not renewing their communications licenses.

In 2008, he began to phase out the nation’s currency, the Bolívar, replacing it with “el Bolívar fuerte” (the Strong Bolívar); each of the new marks being worth one thousand of the old. The move induced a short-lived confidence in the Venezuelan market, but the value of the existing currency has fallen by almost 80% versus the US Dollar during the past year and a half . While against the burgeoning Euro, it has done much worse. On the black market (proving, I suppose, that there is no honour among thieves) the ‘back-alley service charge’ on the new currency is higher than for the standard Bolívar. (Note: Most currency exchange systems list only the standard Bolívar by default.)

I wonder where he could be getting such crazy ideas?