“We’ll laugh about this when we’re older,” people are fond of saying after going through a rough patch together. But is it true?

Apparently not when it comes to cartoon images of the Islamic prophet Mohammed.

Denmark cartoonist Kurt Westergaard’s unflattering portrait of the prophet capped by a bulbously bomb-laden, fuse-lit turban appeared alongside eleven other similarly-topical, debatably-comical entries in the Jyllands-Posten newspaper in September of 2005.

He is apparently now trying to sell numbered prints of his work over the internet.

Here’s a Flashback from early 2006, courtesy of VizReport:

(VizReport) How can pictures printed in a Danish newspaper last September be causing such massive upheaval today?

It seems that a lot of people are confounded by the protests (some of them violent) that are currently raging worldwide against cartoons depicting the Islamic prophet Mohammed.

The whole thing appears to have started when Danish author Kåre Bluitgen had a tough time trying to find someone to illustrate his children’s book on the life of the prophet. When the matter came to the attention of the cultural editor of the Danish newspaper Jyllands-Posten, Flemming Rose, he contracted twelve different artists to provide their own visual interpretations of Mohammed for a commentary on the basic problem faced by Bluitgen.

Well, things quickly spiralled out of control; ambassadors were recalled; envoys were expelled; the Libyan embassy in Denmark was closed; apologies were issued; boycotts against Danish goods were initiated; dramatic demonstrations were held; more newspapers printed the offending images; apologies were issued; and several political cartoonists went into hiding.

Did I mention that apologies were issued? In fact, the management of Jyllands-Posten apologised before widespread protests even broke out. Most of the other newspapers that re-printed the pictures have also since apologised. However, few apologies will be forthcoming from Western governments (as demanded by many protesters) because the press in the West is generally free from direct government control. Things are very different in a number of Muslim majority countries where freedom of the press is usually subject to the wishes of the ruling party.

On a religious basis, there are two very different reasons for the cartoons to have caused a fuss:

1) Idolatry – Any depiction that is flattering runs the risk of becoming an icon for worship. This is directly descended from the Book of Exodus, the second of the five books of Moses.

This is a difficult concept for us to imagine in our image-saturated world.

Geometry is okay. Words are okay. But no pics.

2) Blasphemy – Following right along into the next commandment: Don’t take the Lord’s name in vain.

This, I imagine, would also include defaming the Lord, or the word of the Lord as faithfully presented by his prophets, or his faithful prophets…in that this would reflect on the perception of the Lord’s word.

The extension to the basic precept opens the door to potential offense if everyone is not in complete agreement on an “official” list of prophets.

On a sociological level, it’s easy to understand why people fervently devoted to Islam could be upset with some of the images. There’s no doubt about it; some of the pictures and commentary could be considered anti-Islamic. Most of them are in poor taste, to one degree or another. That has definitely provided the emotional impetus to get people out the door to protest.

But this is about more than just a few ill-conceived cartoons. It’s an expression of the pressure and desperation that is building in the world.

It’s also about the objectives of several groups that seem reticent to allow this unfortunate episode to progress to its most logical and productive resolution. I can’t tell you why some people see it as their job to fan flames wherever they find them. Some even carry matches. Others, gasoline!

Well, that would certainly explain the burned-out embassies and consulates. 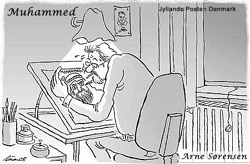 The best cartoon of the lot (by Arne Sørenson) goes directly to the heart of Bluitgen’s dilemma. It depicts an artist sweating nervously as he surreptitiously works by low light, windowshade drawn, on a picture of what we are told is Mohammed.

This is an image with humanity. It doesn’t disrespect anyone’s religion, but comments effectively on a bizarre situation faced by professionals who normally create graven images without a second thought.

It may be impermissible for reverent Muslims to respectfully portray Mohammed in pictures, but the same does not necessarily hold true for non-believers. And even if it did, it is also a fundamental tenet of Islam that the punishment should fit the crime…but not in the way that Iran has attempted to turn the controversy in their own favour, by organising a cartoon competition. Topic: The Holocaust.

Perhaps someone can point out for me exactly where in the Qur’an it says that two wrongs make a right.

5 responses to “Still Not Funny”